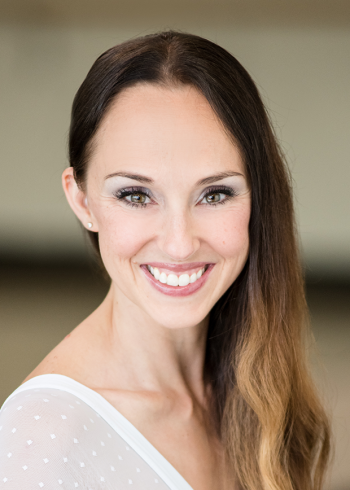 Dana Benton was born in Hamilton, Ontario, Canada and at the age of 9, she was accepted to the National Ballet School in Toronto where she trained for eight years. Dana graduated from the National Ballet School with Honors in Academics and was awarded the Peter Dwyer Award for Excellence in Dance. Upon graduating in 2000, Dana received a contract with Alberta Ballet Company in Canada. She spent one year with the Company as an Apprentice. In 2001, she joined Colorado Ballet and she has performed many soloist and principal roles with the Company. Dana was promoted to Soloist in 2007 and then to Principal in 2014. Dana will be retiring at the end of this 2022/23 season. She is looking forward to working with the Colorado Ballet Academy as the Academy Principal.

Dance training and awards:
Lou and Pauline Zamprogna at The Dance Centre
National Ballet School in Toronto, graduated with Honors in Academics in 2000, received the Peter Dwyer Award for Excellence in Dance
Hamburg Ballet School in Hamburg, Germany

Selected roles and ballets:
Odette/Odile in Swan Lake
The Sylph in La Sylphide
Alice in ALICE (in Wonderland)
Belle in Beauty and the Beast
Swanilda in Coppélia
4th pas de deux in Jirí Kylián’s Petite Mort
Waltz Girl in Balanchine’s Serenade
Cow Girl in Rodeo
Ave Maria Pas de Deux
Sugar Plum and Clara in The Nutcracker
Gulnara in Le Corsaire
Tinker Bell in Peter Pan
Pink and Aqua in Bruch Violin Concerto No. 1
Red Girl in Celts
Lucy in Dracula
Hermia and Peaseblossom in A Midsummer Night’s Dream
Flames of Paris Pas de Deux
Bomb Squad in In The Upper Room
Lead Souvenir Lady in the Great Galloping Gottschalk
Amy Seiwert's Duet It's Not a Cry
The Muse in Dominic Walsh's Wolfgang (for Webb)
The Younger Sister in Antony Tudor's Pillar of Fire
The Angel in Lorita Travaglia's The Angel of Buenos Aires
The Blue Couple in Twyla Tharp's Brief Fling
*Featured role in Amy Seiwert’s Traveling Alone
Juliet in Romeo and Juliet
Giselle in Giselle
Aurora in Sleeping Beauty
Kirti in Don Quixote
Principal Couple in Theme and Variations
Dorothy in The Wizard of Oz
Softly in 9 Sinatra Songs

*More about Dana:
In 2015, Pointe Magazine named Dana as one of the top 12 "Standout Performances" of the year for her performance of Traveling Alone with Amy Seiwert's Imagery.