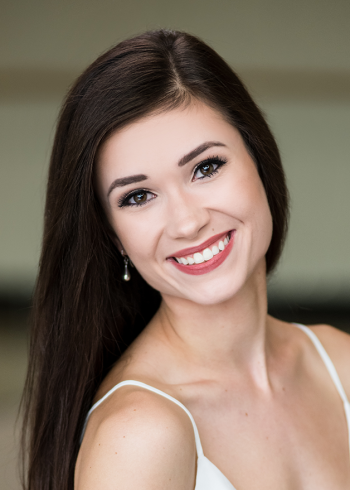 Alexandra Wilson was born and raised in Highlands Ranch, Colorado. She began training with the Colorado Ballet Academy at age 9, spending her summers training on scholarships across the nation. Alexandra competed in Youth America Grand Prix and was awarded First Place Classical in Denver leading her to the New York Finals. At age 16, Alexandra accepted an invitation to train full-time on scholarship with the Kirov Academy of Ballet.

During her final semester with the Kirov Academy, Alexandra was selected by the artistic director of the Universal Ballet Company to travel to South Korea and perform in their full-length production of Swan Lake. Upon graduation, Alexandra returned to South Korea, joining the Corps de Ballet of the Universal Ballet for their 2016/2017 season. After returning to the states, she joined Colorado Ballet’s Studio Company and was promoted to Apprentice in the Company in 2019 and then to Corps de Ballet in 2020.

More about Alexandra:
While with the Universal Ballet, Alexandra had the privilege of performing alongside Alessandra Ferri and her partner Herman Cornejo in Kenneth MacMillan's Romeo and Juliet.